About the Levin Cousins Club Records

The collection was acquired in 2020. It includes a constitution and by-laws for the Levin Cousins Club, membership records, and meeting minutes primarily from the mid-1950s to the early 1980s. Included within the minutes is a Memoir for former president Samuel William Eisenberg, reprinted from Transactions and Studies of The College of Physicians of Philadelphia, whose death is covered amongst various minutes in 1972-73. Also included is a memorandum written on July 20, 1999 by Bernard G. Kelner, handing down the Levin’s Cousins Club minutes to Elizabeth Pozen. Additionally covered is a documented historiography presenting the Levin family coat of arms, and detailing the origins of the Levin surname.

Following targeted persecutions of Russian Jews in 1881, Jewish families began emigrating to surrounding southeastern regions of New Jersey to form agricultural colonies. These communities were named Alliance in honor of Alliance Israélite Universelle of Paris, and were officially founded May 10, 1882 by the Hebrew Emigrant Aid Society of New York and Philadelphia. The core group of consisted of 43 settlers, though at one point it contained up to 70 families, with one of the first being couple Israel Hirsch and Esther Levin, arriving in Alliance Colony, Pittsgrove Township in 1882, with their children Hannah Coltun, William Hirsch Levin, and Abraham J. Levin. Following their immigration, the couple went on to have 5 more children: Samuel F. Levin, John H Levin, Mendel Levin, Jenny Spiegel, and Fannie Levin.

In order to maintain a sense of solidarity within future generations, the Levin Cousins’ Club was founded. All members of the cousins’ club are children and spouses, descendant from the previously listed children of Israel Hirsch and Esther Levin. Meeting minutes start recording in 1955, and an official Constitution and By-Laws were adopted December 10, 1960. Listed there, the organization's main object and purpose were to promote preservation of familial relationships, family spirits, and unite descendants. Four meetings were held each year, with each couple responsible for one meeting within the rotation. The club gives context towards understanding biographical information regarding the Levin family, recounting personal life events of the attending members. Meetings featured reports on family accomplishments, welfare, vacations, births, marriages, and deaths. Underneath the superficial, these notes also inherently contain insight to the proof of success that sprung from previous generations of struggling immigrants. 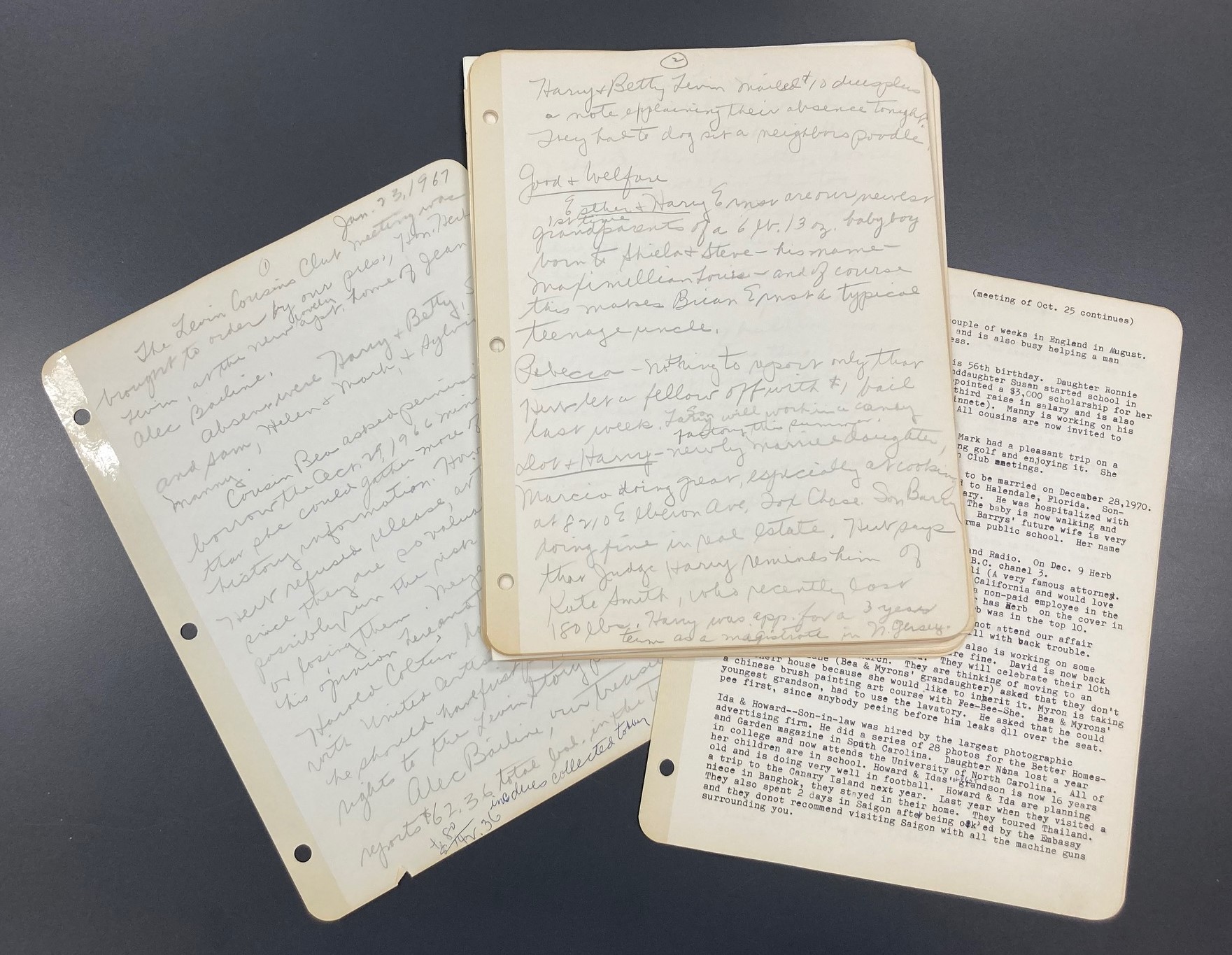 Minutes of the Levin Cousins Club