This collection includes scrapbooks and newspaper clippings, date and scheduling books, voting records, and speeches and statements from William Hughes’ career as a lawyer and time in the United States Congress as a Representative for New Jersey. The bulk of the materials are from his congressional career (1975-1994). Two years’ worth of his congressional voting records from 1975 and 1976 are also in the collection. Researchers may be interested in the votes from this time period that refer directly to the Vietnam War and issues surrounding that era.

Researchers interested in this collection should know that it does not contain any materials relating to Hughes’ time as the Ambassador to Panama. It focuses on his early years as a lawyer and his time in Congress. A few of the early scrapbooks contain personal memorabilia, such as his bar exam test booklets and family holiday cards. There are also some clippings and a scrapbook from his early legal career, from 1958-1959, 1964-1965, and 1971.

The William J. Hughes Center for Public Policy at Stockton University maintains a permanent display of some of Ambassador Hughes’ memorabilia, including framed photographs of him meeting with dignitaries and presidential signing pens. The Center’s website includes a list of the items on display. 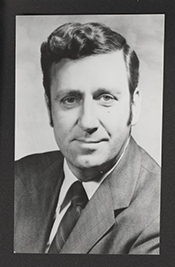 Collection of the U.S. House of Representatives, Library of Congress.

William J. Hughes was elected to Congress in New Jersey's 2nd Congressional District in 1974 and served there until 1994. Later, he served as the United States' Ambassador to Panama.

While in Congress, Representative Hughes succeeded in passing a multitude of laws, like new legislation to ban ocean dumping of harmful sewage and chemicals, enacted into law in 1988. He also worked to reduce the number of marine pollutants including plastic and medical waste. He drafted legislation to preserve the New Jersey Pinelands with colleague Representative Edwin Forsythe. Representative Hughes also worked on a number of gun-related matters, including passing laws such as the Undetectable Firearms Act of 1988, Armed Career Criminals Act of 1984, and Firearm Owners Protection Act of 1986.