Art in the Library

The Richard E. Bjork Library displays a number of significant works of art on its main level.

Two traditional Chinese paintings by the contemporary Beijing artist Yong-hou Bai greet the visitor at the Library’s main entrance. “Mount Hua” depicts a Chinese mountain with a long history of religious significance. “Plum Blossoms,” the larger of the two paintings, shows a plum tree in full bloom, symbolically expressing the Chinese aesthetics of perseverance and hope. The artist was an artist-in-residence at Stockton in 2001. Both paintings were completed during the artist’s stay and, afterwards, donated to Stockton. 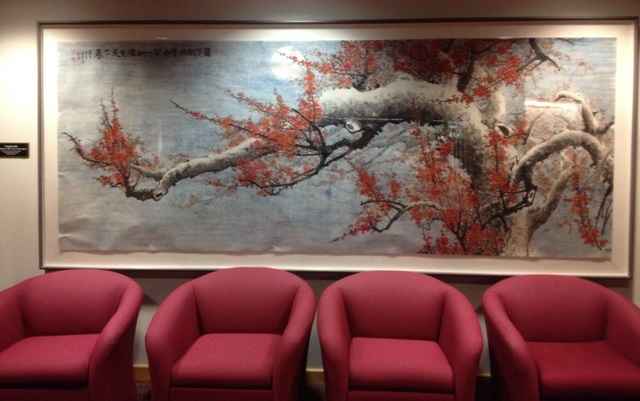 The Plumb and Rose

The installation art found in the Library’s main level exedra area  was done by New Jersey artist Clyde Lynds in 1995 as part of the Library’s expansion and renovation. A square cast concrete slab depicting two open books rests on a stainless steel base. From a compass rose drawing on the surface, fiber optic filaments glow in patterns, presenting symbols from both microcosm and macrocosm.  For instance, the night sky as it appeared on February 9, 1969, the date Stockton was founded, is illuminated by a sequence of glowing filaments on the surface. Suspended above the sculpture, a surveyor’s plumb bob hangs from a wire cable from the upper level ceiling. 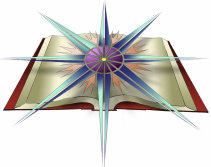 Around The Plumb and Rose sculpture are four framed lithograph prints by the Spanish surrealist artist, Salvador Dali (1904-1989).  The prints are hand-signed in pencil by the artist and are from an original series of 17 watercolor paintings of playing cards, namely the Ace, King, Queen and Jack. 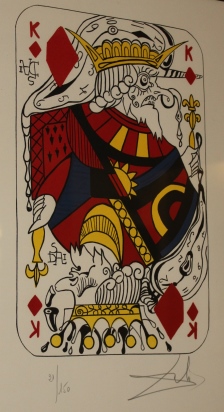